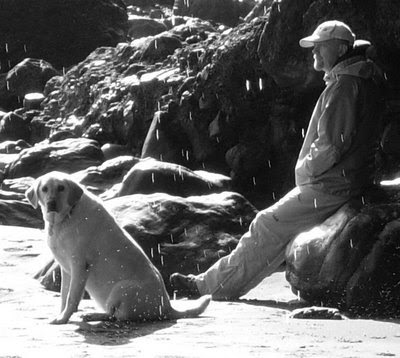 Our dog is old. At twelve and a half, Keeah is among the few Labradors to reach this ripe old age, the equivalent of about 75 in human years. She is remarkably healthy, not to mention mostly blind and rather lopsided due to a large fat lump, and she is challenging the adage that you can't teach old dogs new tricks. For example in the past year or so, she has learned to open almost any door that isn't locked, putting loaves of bread and anything resembling chocolate at great risk. I most admire her when she is sprawled across a sunny spot on the rug as if nothing matters in the world, which she does for the better part of most days.

At 50, I too am learning new tricks. When I gathered last summer's CIT's for an hour or so during the recent staff retreat, I asked them to once again write a letter - from God to them - to help them hear what he was saying to them at that time. I like doing this myself, though I write such letters only when I am asking a group of students to do the same. The time I gave these CIT's was short, and so my letter from God to me was also very short. But it could have been just three words and that would have been enough.

Among other things, I found myself writing this: "Do less, better." I had no idea what that meant, and so have found myself thinking about it a great deal since then. A story from Luke's gospel comes to mind:

As Jesus and his disciples were on their way, he came to a village where a woman named Martha opened her home to him. She had a sister called Mary, who sat at the Lord's feet listening to what he said. But Martha was distracted by all the preparations that had to be made. She came to him and asked, "Lord, don't you care that my sister has left me to do the work by myself? Tell her to help me!"

"Martha, Martha," the Lord answered, "you are worried and upset about many things, but few things are needed — or indeed only one. Mary has chosen what is better, and it will not be taken away from her."

How I want to learn to choose what is better! Or even best! Here's how it is going: I've made this deal with God that I would stop chasing after what I think I should do, who I should talk with, where I should be. Instead, I would pay closer attention to the things and people and situations God places in front of me or directs me to - the stuff that is right in front of my nose that I have often missed or neglected due to my preoccupation with what isn't there.

It has been amazing. Not only do I find that there is plenty enough to manage right in front of my nose, but I have been so much more effective and satisfied with my conversations, opportunities for prayer, my daily activity and ministry.

I like doing less, and doing it better! Paul put it this way in his prayer for the church of Philippi: "And this is my prayer: that your love may abound more and more in knowledge and depth of insight, so that you may be able to discern what is best and may be pure and blameless until the day of Christ, filled with the fruit of righteousness that comes through Jesus Christ — to the glory and praise of God."

I need a brainy love, one that not only wants what is best for people but knows what is the best, one that has the depth of insight to choose what is best.

The thing with quality is that you have to sacrifice quantity. And I think that is what God wants. As if he needs me to pump out high production, like a child in a sweat shop! Being as I am in the business of shaping young lives, surely I cannot afford hurry, or to be easily distracted or preoccupied. This construction requires gold, silver and precious stones, not the wood, hay and stubble of surface conversation, half-listening, and time-filling activity.

May this old dog never stop learning.
Posted by Jim Badke at 8:39 pm

Well, if that isn't exactly what I needed I don't know what is. Thanks for your wisdom once again my friend.

This lesson feels very real to me because I have been focusing on this passage in my own study.

Wow Jim, well written. The last paragraph is a beauty. Amazing insight and wisdom in this, for all people and not just the old dog=) I've been looking at the same thing for a little while now, and still it is a constant battle to choose quality over quantity... encouraging to hear I'm not alone in this!

I am learning this as well, sitting at the father's feet. I need to do a better job at it. Through out the day i think. Thanks for the insight.

So the passages that always speak to me the most, as you remember, are the ones that upset me, even to the point of making me mad. Yep... that's what that passage does to me. Cause I need to hear it. God brought this passage to me again a couple of weeks ago on a tubing retreat. So many things to do... but I MUST remember to keep my focus on God. Thanks Jim! Although the putting it into practice will be very difficult... and frustrating :)

Ha, and I bet you smiling when reading this! This old dog hasn't quit learning :)
Thank goodness the frustrations haven't quit! And I still can't believe I can say those words!