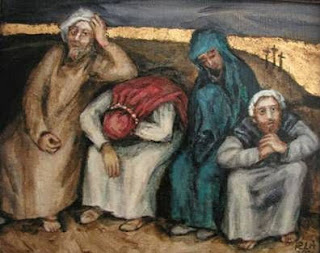 Thomas glided along the darkest corners of the street as if he was another shadow. The homes and shops were quieter now. Since sundown, every courtyard and byway had buzzed with chattering neighbours. Now, all slunk away to their homes, repressed by a nameless apprehension. Dreadful deeds happened here yesterday. Their atmosphere hovered over the city like a miasma.

He came to a gate in a stone wall and found it locked. Three times he knocked, then three again, and three again. If it had not been so silent, he would not have heard the servant girl as she asked his name. Satisfied with Thomas' reply, she unbolted the gate and bolted it again behind him. He knew the way, so she left him to climb the steps to the upper room where all were waiting.

Thomas knocked again, three times three, but the response was much slower this time. Someone unlocked the door and dragged him inside before too much light escaped. The bolt clanged shut, and a post kept the door secure. "Easy, John," Thomas told the man. "No fear. I am not followed."

John grunted his reply, "You take too much of a risk, all the same." Thomas shrugged off his concern. "Was it worth it? What did you find out?"

"Let's join the others first. They will want to hear." Thomas followed John to where the lamps gave more light. Men sat or lounged in every corner of the room. Two at the table played some kind of game with sticks. They didn't laugh or call out, which made their game seem all the more earnest. Peter snored, mouth open wide. Most of the others sat and stared into dark corners of the room, lost in their thoughts.

They are in pain, like me, Thomas thought. A little more than twenty-four hours it was, and we are all still at a loss. Here we hide in fear, and we jump at every knock on the door, as happened moments ago. Then fear subsides to numbness, and numbness to despair.

The hardest part is that no one knows how long this will go on. Our wait already seems interminable. It would help if we knew exactly what we are waiting for. But no one knows. We wait, not knowing what will happen after this. It is hard to imagine the world going on after all that has occurred. These men can't take much more, but more is all we have.

As Thomas walked into the lamplight, all the reposing forms came to life. Andrew slapped Peter on the shoulder, who gasped awake with a cry. The men made room for Thomas and crowded in close to hear his news. "Tell us, Thomas," Peter took the lead. "What is happening out there? What have you heard?"

For a moment, Thomas enjoyed the attention, but the gravity of his news ruined the novelty. "There is much talk," he began finally. "Too much. My head spins with it. Most that I heard was mere speculation, not worth repeating. Someone has torn the veil in the temple. People are walking the streets who should be dead. I saw one, surrounded by a small crowd who demanded to know how it happened. The poor fellow blustered to the point that he might have wished he was back in his quiet tomb."

Thomas surveyed the faces around him. This was news, but not the news they sought. He wondered where to take them from here. "There is much discussion about the darkness and the earthquake..." Andrew looked as if he was about to explode, so Thomas stopped. "What do you want to know?"

Everyone burst out at once. Thomas sat back, no longer glad to be the centre of attention. It took some heated words before James and John intimidated the last of them into silence. When the storm subsided, they all turned to Peter.

"Thomas, what do they say about us? Are the authorities looking for Jesus' disciples? Are we in danger still?" Peter's eyes betrayed his fear. They were all afraid. Did Jesus not say that whatever happened to him would also happen to his disciples? If they hate me, he told them often, they will hate you. To follow him has turned out to be a death wish.

"Yes, we are in danger. Everyone was asking if anyone has seen us, or if the temple guard has captured us. Yes, they seek us still."

There was silence in the room for some time. Each man wrestled with the implications of their long-ago decision to follow Jesus. They were so confident he was the Messiah who would redeem Israel and set her free. All their hopes were set on being right there when Jesus set up his kingdom. Each had imagined his place in it: the wealth, the authority, the recognition.

Yesterday dashed all expectations as their Master hung on a Roman cross. His disciples had watched from a discreet distance. All except John and some of the women, who had the audacity to mingle with the mocking throng.

Startled out of his own reflections, Thomas stammered, "Um, they have... they have set a guard, at the tomb."

This surprised everyone. "Why?" John countered. "Why at the tomb?"

"They think..." Thomas glanced around, unsure of how they would take this. "They think... we plan to steal the body."

There was a moment's stunned silence, then they all broke into laughter. It felt good, having something to laugh about. "What do they imagine we will do with his body? Hide it in another tomb?" The disciples ridiculed the notion. "As if we can return life to his body! Who would believe us if we said he has risen from the dead, but sorry, we can't let you see him?" They were overloud in their enjoyment of the absurdity. It took John's booming voice and large frame to settle them down again.

When they were all still, they looked at him expectantly. "Tell us, John," Peter pleaded. "You were close in all his councils. You remember Jesus' words. Is everything lost? Is this the end? What are we to do?"

John took his time in answering. His voice was low but confident. "I do remember. He told us, only days ago, as much as it feels like an eternity." He looked at each of the men in turn. "First, he told us not to be afraid. How are we doing with that, hiding out here like children in mischief? 'Do not let your hearts be troubled.' Is this not what he told us?" The disciples glanced at one another, abashed at first. But there were glints of courage as they remembered Jesus' words.

"Then, he told us he was going away. True, he left us not in any way we could have imagined. But it should be no surprise to us. 'In this world, there will be trouble," he warned us. We should not be so alarmed or feel that the world has come to an end. It is only up-ended!" Voices murmured agreement. This is what Jesus promised.

"But he also said he would not forsake us. 'I will not leave you as orphans,' Jesus promised. 'I will come to you.' Here we sit like waifs, abandoned in the street, without hope and without a future. Not so. He has gone from us, but his work is not done. Did he not tell us? 'Greater things than these you will do.' Is that not why he went to the Father?" Heads nodded. "Did he not send us, as his Father sent him? My friends, I do not believe he is finished with us!" The tone in the room was changing. "We are not in a cage; this is a waiting room. Something… no, Someone is coming."

"You have not answered my question, John," Peter reminded him. "What are we to do?"

"We wait!" John's voice was quiet. "We wait on Jesus alone; all our expectation is from him. God has not yet written the final chapter. We watch and pray, as he told us. I cannot believe we will wait long."

Many spoke up then, spirits lifted by John's words. Courage welled up with memories of everything Jesus taught them. Thomas was glad for their enthusiasm, but he was uncertain and restless and had to return to the streets. Nathaniel followed to bolt the door and gate after him. "You will be careful, Thomas? Take no risks! Jesus will come to us!"

Thomas snorted as he slipped out into the night. "Seeing is believing!"