Excerpt From: As The Eagle Walks

Here is an excerpt from my new novel, As The Eagle Walks, available now on Amazon.

“Come! Sit!” He was not the most ruffian-looking of the men in the market, but close to it. His face was half-hidden by the hood on his shirt; his jeans were filthy. The man beckoned me with one hand while pouring the wine with the other. I felt I had no choice but to join him, and his few English words made me hopeful. “Amerikanos, yes?”

I nodded and sat down. I was not the first person to drink from the glass he offered me since it was last washed. I sipped it, hoping the alcohol had some disinfectant quality. “Do you speak English?”

He gave a characteristic island shrug. “Some. I am Antonis. What you need?”

I took the bag from my shoulder. “I’m Jason. I have fish to sell. Smoked.”

He reached in the bag and sniffed the piece he found. “Is good. Where you get?” He proceeded to nibble the bit as he inspected the rest of the bag’s contents.

“Do you know John? Lives in the south.”

He looked up at me in surprise and laughed. Not the most pleasant laugh. I was ready to go find another buyer, but he put his hand on my arm. “John? Iohannes? Only one John here. Always only one. What you do with him?” He said something in Greek that sounded disparaging and laughed again.

I felt offended. “I can sell my fish elsewhere...”

Antonis pressed my arm and prevented my getting up. “No, no. I buy. No thing wrong with fish. But the man...” He made a face that I guess meant John was a crazy man.

I pulled my arm away but hesitated, curious to know his opinion. “What do you know about John?”

He stared into my eyes like I was some idiot child. “He—John—he are... palavos. He mad! Devil!” He looked suspiciously at the bag of fish. “Maybe I no buy.” He looked a bit afraid for a moment and laughed again. “You maybe steal this, no?”

“No! Nothing like that. John gave me the fish to sell.” I stood up to go.

Antonis stood and glared at me. I felt threatened and sat down again, and his face relaxed. “Give you ten for fish, yes?”

I said nothing. The ferry passage alone was nine euros. John must have expected me to receive much more for the fish if I was to buy clothing and medicine for Manos. “Not enough. I need to buy medicine.”

He didn’t understand me, and it took some exaggerated charades to make my meaning clear. “Drugs?” he guessed finally. “For you?”

Antonis’ face darkened. “Manos. Friend to John. I hate.” I couldn’t imagine how someone could hate someone as harmless as Manos, and asked why. “He send me to jail, long time. Bad place, that.” He spat in the dirt by my feet. I felt the spray.

“Manos was a policeman?”

“No, not police man. Dikastes.” He took a hammer from a box behind him and banged it hard on the table, making both me and our glasses jump. I took from his pantomime that Manos had been a judge and had sentenced this man to jail.

He waved an angry hand of dismissal. When I turned, he called in a voice husky with emotion, “You watch out, man! John no good. Manos no better—he worship him, I think! Both... crazy!”

I stopped. “What do you mean? Who does Manos worship? John?”

Antonis snapped his fingers. “Him. Many others do. All crazy.”

“But why? Why would they worship John?”

He looked at me like I was playing some game with him. “You must know. Who they say is John.” He poured the rest of my wine into his own glass and gulped it down in one shot.

He shrugged and eased back into his chair. “You are fool. I feel sorry.” He gave another wave of dismissal.

But I would not be put off. “Tell me. What do people say about John?”

He laughed, mocking, and leaned toward me. “They say—John is Apostle. The Beloved. Very, very, very old man. Oldest.”

I felt something cold in the pit of my stomach. “John, the Apostle? Like, from the Bible?” I couldn’t believe what I was hearing. How could anyone think this? And Manos, how could he possibly believe that his friend was John from the days of Jesus? Yet, what would a man like Antonis gain from claiming so?

“You go now. Sell your fish.” He said more in Greek words that sounded less polite while waving me away with both hands. I picked up the bag and walked away.

My New Novel: As The Eagle Walks 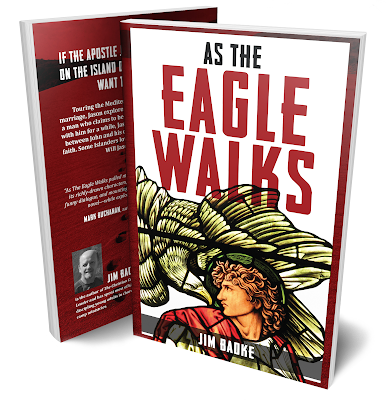 If the Apostle John was still living on the island of Patmos, would you want to visit him?

Touring the Mediterranean to save a crumbling marriage, Jason explores the island of Patmos and meets a man who claims to be the Apostle John. Invited to stay with him for a while, Jason wrestles with the gap he sees between John and his own understanding of Christian faith. Some Islanders love this man and others hate him. Will Jason uncover why?

My new novel As the Eagle Walks is available now on Amazon.