We are off! There were no suitable campervans in the Kerikeri area, so our friends John and Michelle took us to Auckland on their way to a family camp at Totara Springs in Matamata. They have done so much for us, and made the buying of a van as easy for us as could be. Don't laugh: it is an 1997 Toyota Previa with (you won't believe this) 739,000 km. However, both engine and transmission are fairly new, everything works and we will just hope and pray that it will keep doing so for another 5000 km! People do tend to keep their vehicles a long time, but this is a lot even for here. Cars have to be checked and certified every six months, so they are kept up well.

By the time we completed the purchase, gassed up and found some food, it was getting on in the afternoon. We had the option of going to another friend's place near Hamiltion this day or the next, so we decided to go the two hours south and get to their place 12 km from Ngaruawahia that day (here is how they remember how to spell it: nine-girls-are-running-under-a-wharf-and-here-i-am). So glad we did! Mike was in my C&C group at my first church where I was youth pastor and also used to work at Camp Qwanoes as chef in the summers. Except for a bit of gray hair he hasn't changed a bit. Still full of fun and mischief, and still the talker. And he struck gold when he found his wife Helen (also at Qwanoes) - she is a farm girl from nearby and one of those Proverbs 31 kind of people. They and their son David made us feel at home right away. David took me down to the creek to find crayfish by torchlight, Helen laid out a gracious meal for us (though we told her about our McD's burger on the way) and Mike had story after story, about our days together long ago and all that he has been doing since.

We spent the next two days with them. They took us to the little surf town of Raglan, where we had lunch at a little cafe and wandered along the harbour. We went to the best left-hand break in the southern hemisphere, but the day was flat and there were no surfers. Mike loves to cook and loves to eat, and he and Helen pulled out all the stops, with roast ham and amazing steaks, with kumara and barbequed smoked potatoes and wonderful veggies. I may not fit in my plane seat on the way home! David and I had nerf wars all over their beautiful 95-year-old house, slipping on the hardwood floors. Mike loves to talk theology, and Helen and Sarah got along like sisters. It was hard to leave, but we hope to connect with them again on our way back north, when they will be staying at their bach on an east coast beach.

The day we left was a wet one. A cyclone has been building in the Tasman Sea, and we got the first taste. Much of the drive was typical Hobbiton, but there were also steep and snaky parts through jungle growth, and several places where the beach was right beside the road. 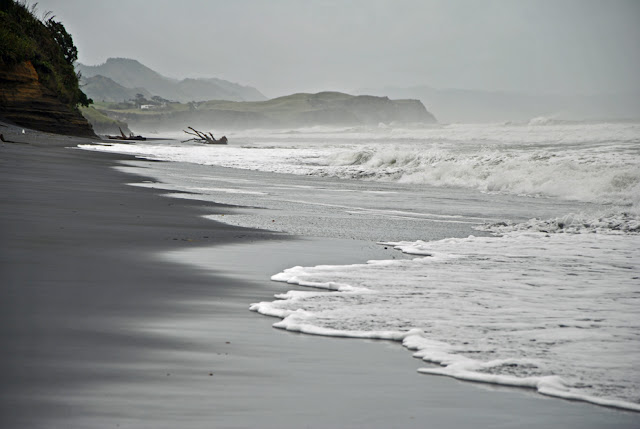 This photo is interesting, because it looks like a sunny beach with shadows coming from the left. Actually it wasn't sunny and there were no shadows; it is the sand that is black. Someone was surfing here, and it was at least double overhead with some nice tubes.

We didn't have any plan of where to stay that night. We passed a few campgrounds, but nothing seemed quite right. We were nearing New Plymouth, and Sarah suggested pulling into a smaller town by the beach to see what we could find. We drove past many houses and directly down to a park that was free of "no camping" signs, which made it fair game. It was right by the beach and had a washroom. I talked with a local on the beach, who told me that no one would mind us staying there overnight, and that a few locals might come by and drink and beer or two and leave, but it was quite safe. He was right. 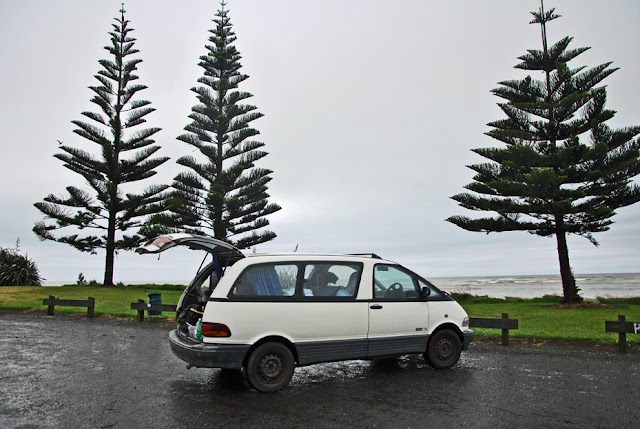 We got through cooking dinner out the back of the van, and then the mist turned to rain, which drummed on the roof all night, so that we often could not even hear the breakers. But we slept well, and I think our little van stood the test - or we stood the test in our little van. I coudn't imagine we will find worse weather than that.

Until today. When we got up, it was still raining, and we had to dry the condensation off the windshield. All day, the rain pelted down and the van was rocked by the wind. We missed seeing a majestic cone that in the pictures looks like Mt. Fuji, and really couldn't see much of anything until we got near Wellington. But we accepted the journey God gave us with grateful hearts that we were safe and dry. A friendly cashier from Toronto recommended that we see the Cable Car Museum. We went, and it was cool, but we decided to come back a sunnier day. Instead, we went to Hannah Dunn's home (she also spent a summer at Qwanoes), for which we are grateful, though Hannah herself is in Australia! We will see her on our trip back north again. As I write, the wind is howling around the house, and it is cold! Hannah's dad turned the heat off for the summer, so her sister's New Years party will be a bit chilly. By the way, Happy New Year's, a whole day early for you North Americans!

Tomorrow, we are booked to cross Cook Strait (which could be a bit rough) and start our South Island adventure! Stay tuned.

i'm so excited for your book. and for all your travels! if you are coming through vancouver on your way home or sometime after you've recuperated, visit us please! we would love to see you! much love to you and Sarah!