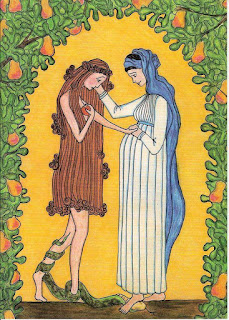 Mary sighed, pondering what to say next. Luke was always kind, but also persistent in his pursuit of the Story. Some parts were pleasant to recall, like ornaments long treasured. But some places still pierced her heart after all these decades. "Not right now, my friend. I am tired." She stood, groaning under her breath at the familiar ache in her back. "Let's go back to the beginning. Please read to me again the things you have written about me. Perhaps you can twig a few more details from the corners of my mind."

Luke smiled at her, watching as she lowered herself to a new position on the cushions. The corners of her mind were precious to him, nuggets of story he would find nowhere else. He was anxious to mine them while he could, but the extraction must be done carefully, gently, respectfully. The joy and sorrow this woman had endured in her lifetime, most could not imagine. He rolled the precious scroll back to the place where Mary's story began.

Clearing his throat, Luke read, "In the sixth month of Elizabeth's pregnancy, the angel Gabriel was sent by God to a town of Galilee called Nazareth, to a virgin engaged to a man whose name was Joseph, a descendant of David, and the virgin's name was Mary. The angel came to her and said, 'Greetings, favoured one, the Lord is with you!' But she was greatly troubled by his words and began to wonder about the meaning of this greeting..."

"'Greatly troubled...'! My friend, you are too charitable! Did I not tell you, I was terrified?" Mary chuckled. "Tell me, Master Luke, have you ever seen an angel?"

"No, sadly, I cannot say I ever have. Perhaps our Lord pities my pragmatic mind. I might not believe my senses if I saw such a being."

"How can I describe this to you?" Mary paused in thought. "When I was young, my brothers were sometimes coerced into taking me on their boat. I was told to sit still in the stern, as ballast, where I would not get in the way. I loved it when the wind filled the sail and the boat heeled hard over as we rushed through the water. In that moment, the whole world turned on its side, and I in my seat perceived a whole new sense of what was level."

Mary's eyes were distant as she remembered. "That is how it was with the angel. When he appeared, I realized that my old familiar world was actually askew, and that the creature before me represented the universe's true plane—what was true, what was right, what was in alignment." She looked up at him. "My fear was not about his appearance, Luke, alarming as that was. My fear came from the awareness that I was very much out of line with the cosmos. Like Isaiah, my heart cried, Woe to me! For I am ruined!"

Luke pictured the familiar scene of Isaiah and his vision in the temple. "Thank you, Mary! That makes perfect sense." His quill was poised over the parchment. "I should change my wording, then?"

"No, no," Mary waved off the notion. "It is not worth smudging your beautiful hand. Indeed, I was greatly troubled - that will do. But you do understand now?"

"I can't say that I do, Mary. In my mind, I can't imagine you ever being out of line. I am sure you had nothing to fear from an angel."

"Which is what he said as well, that I had found favour in the eyes of God. But his choice of me was all grace, not my deserving. Blessed is he!"

There was a moment's quiet as each digested these words. Then Luke continued, "So the angel said to her, 'Do not be afraid, Mary, for you have found favour with God! Listen: You will conceive and give birth to a son, and you will name him Jesus. He will be great, and will be called the Son of the Most High, and the Lord God will give him the throne of his father David. He will reign over the house of Jacob forever, and his kingdom will never end.' Mary said to the angel, 'How will this be, since I have not known a man?' The angel replied, 'The Holy Spirit will come upon you, and the power of the Most High will overshadow you. Therefore the child to be born will be holy; he will be called the Son of God.'

"They are not my words, Mary."

"Well, then I love the way you weave the words of God into a story. Yes, this is exactly right. Though at the time, it seemed such a strange way for God to express his favour toward me. He upset my entire world. As if the boat had capsized. The angel's words raised so many questions, all summed up in the one I dared ask him: 'How will this be?' I did not doubt his words—they carried far too much authority—but I did want to know by what miracle I would become with child, since Joseph was in no rush to marry me."

"I know what some in the village still say about you to this day. They refer to Jesus as 'Mary's son,' never Joseph's. And they are right, as much as they intend to dishonour you." Mary shrugged at his words. She was too old to care anymore what the village thought of her. Luke touched the words on the page. "When did you first know that what the angel said had come to pass?"

"That was a journey," Mary replied. "I didn't need any evidence to know I needed an excuse to leave town. I arrived at my cousin Elizabeth's home with the realization that my womanly period had not come. But it was Elizabeth's greeting that made me accept the reality of what was happening to me."

"Blessed are you among women," Luke read, "and blessed is the child in your womb! And who am I that the mother of my Lord should come and visit me? For the instant the sound of your greeting reached my ears, the baby in my womb leaped for joy. And blessed is she who believed that what was spoken to her by the Lord would be fulfilled."

"I had never heard my cousin speak this way before. She reminded me of King Saul, who unexpectedly found himself among the prophets." Mary shifted and winced with pain. "Her miraculous pregnancy had changed Elizabeth, and I began to see that mine would change me."

"In what way?" Luke queried.

Mary paused before answering. "I was always a good girl, the pride of my parents. But I never knew why I followed all the rules, why the thought of disobedience horrified me." She smiled at the memory. "But then my cousin confirmed that the miracle growing inside me was truly the Lord of heaven and earth. I realized for the first time that I was a creature, and that I was subject to a reliable, gracious, loving Creator. That to say yes to him was my greatest hope and joy. And those who turned their face from him did so to their harm, and the detriment of all those around them."

"Your song." Luke ran his finger along the words as he read, as his eyes were suddenly too misty to be trusted with their task.

My soul exalts the Lord,

and my spirit has begun to rejoice in God my Savior,

because he has looked upon the humble state of his servant.

For from now on all generations will call me blessed,

because he who is mighty has done great things for me,

and holy is his name;

he is merciful to those who fear him.

He has demonstrated power with his arm;

he has scattered those whose pride

wells up from the sheer arrogance of their hearts.

He has brought down the mighty from their thrones,

and has lifted up those of lowly position;

he has filled the hungry with good things,

and has sent the rich away empty.

He has helped his servant Israel,

as he promised to our ancestors,

to Abraham and to his descendants forever.

"Amen!" Mary intoned. "I love hearing myself reflected in your voice. You too know the delight and wonder of saying yes to him." She sighed and nestled herself deeper in the cushions. "It has not proved to be an easy journey, nor a safe one, this saying yes. But good, yes, it has been good."

They remained in companionable silence for a time, and then Luke saw that, once again, Mary had drifted off to sleep. The lines of care eased from her face and she smiled in her slumber; but for the grey hair, she might have been that young girl again whom the angel once visited so long ago. Luke rolled up his scroll, carefully set his quills and ink in order, and left her in peace.