Day Six
Well, I spoke/wrote too soon. Though the locals say we "lucked out" on the weather, since we missed the rain and the worst of the winds, it was blowing hard enough last night that at 4:30 am I got up and moved the truck so that it pointed more into the wind. I am sure I didn't disturb anyone, as we were almost the only ones in the campground. It was still blowing and amazingly still foggy in the morning, but by the time we got back to the Fortress of Louisburg the sun was breaking through for another perfect yet still windy day. We were given permission to drive up close to the site of the town because it would be easier for Sarah, which required driving for a kilometer or so along the open coast. The waves being tossed up by the hurricane were not huge by West Coast standards but still impressive and brilliant in the sunlight.

The Fortress is also impressive, considering it is entirely reconstructed from the extensive plans and books left behind by the French in the 18th century, because the British destroyed the Fortress and the town entirely. We enjoyed watching the children dance, and decided to splurge a bit with some "fine dining" at one of the eating establishments. We used old silverware and dishes (it was the only place in town with the luxury of knives and forks) and though I would never do to salmon what they did, it was very good. Doing the tourist thing is tiring, and we still needed to drive a couple hours and find a campsite, but we once again found a spot with a magnificent ocean view near the south end of Cape Breton. By evening the wind was dying, which is good because we are taking the ferry to PEI tomorrow. Hey, you are thinking, isn't there a bridge now? Why yes, but the ferry is free on the way there (you only pay to leave the Island), so we are taking the ferry to the east end and the bridge back from the west end.

Day Seven
Calm and gorgeous today. We completed our circuit of Cape Breton and pushed on to the ferry to PEI, since we are now backtracking a bit and because we were not sure how busy the ferry would be. We arrived at 11:10 am and found out the ferry was leaving at 11:15. This is obviously not BC, because we made it on that ferry! The boat seemed small and crowded compared to what we are used to, but hey - neither do we usually have live music on the deck! It was a fiddler (and guitar) from PEI who is apparently quite famous, Richard Wood. This is what we have been hoping to hear, some Celtic music, and it was very good. As I was talking with them while buying their CD I found out that they were headed for a concert and asked if they could have free passage on the ferry if they played! Oh, the life of the starving musician! We still have Celtic music in our heads from listening to it as we traveled across PEI this afternoon.

Something Sarah really wanted to do was to see the Anne of Green Gables house in Cavendish. We got there mid-afternoon, unsure if that would be enough time to see it all, but it turned out to be small compared to the other historic site we just visited. It was hard to remember that it was just a fictional story, and you could imagine red-haired Anne showing up at any moment (which would have greatly added to the experience). Tomorrow we have tickets to the Anne play in Charlottetown, so we haven't had our fill of Anne yet. 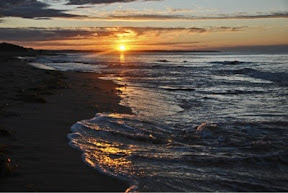 Somehow, we are again camped within spitting distance of the ocean, and we will hear the gentle surf all night. What a gorgeous spot. We have decided to stay one more night here. We are in no rush. Gorgeous sunset.