Day Eight
After a week with no set schedule, it felt strange to have an Appointment to get to: the Anne of Green Gables play in Charlottetown. We set off early and explored a few more northern beaches of red sand and dunes before approaching the city. We found ourselves there quite early, so we parked ourselves beside the water in Victoria Park downtown and had lunch. We should have started to the play sooner, because after I dropped Sarah off at the Theatre I discovered that there is no place to park in Downtown Charlottetown. As the minutes ticked down I finally went back to the park, parked as close to the theatre as I could, and ran! I got there just a few minutes before the play began, warm and sweaty. I hope the man sitting beside me has forgiven me!

The play was excellent. I had been pretty impressed with the version produced by Chemainus Theatre last year, but this was so much more. Big and complicated sets that moved like clockwork, a huge cast and the polish achieved by 40 or so showings every season since 1965. This was the last day of the season, and it was practically flawless.

By the time the play was done and we had picked up some groceries, we realized that the only campsite we really wanted was the one we were in the night before. Good thing PEI is so small! We went back to the beach, just a little down from where we were before, and enjoyed another brilliant sunset. God is very good at those on PEI.

Day Nine
It was hard to leave that spot. I think there is nothing much nicer in this world than walking barefoot on a beach of soft sand with warm waves running up over your feet as the sun rises. But we packed up again and took another route to see what we could see. Green, rolling hills punctuated with blue coves and inlets, tall and ancient houses in all colors, very little traffic. This took us to the artsy town of Summerside, where we dropped in to the College of Piping just to see their Celtic giftshop, to discover that a mini-concert of highland pipes, drums and dance was being offered in just a few minutes. To our surprise we turned out to be an audience of two, but they performed just the same as if we were two hundred. Two girls about 8 and 10 years of age danced, and some of their instructors gave professional performances of bagpipe jigs and reels, incredible drum solos and tap and highland dances, all for us! We thanked them profusely. 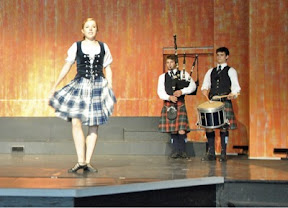 Driving west from there in search of more scenery, we were traveling along a narrow road and hadn't seen any houses for some time when we suddenly came upon a handful of them and - one enormous cathedral! It was open so we went inside. I am sure it would seat nearly a thousand people, and its pillars were marble. It sat right beside the water with an incredible view. What on earth was it doing there? And do a handful of Francophones fill the first few pews for mass on a Sunday?

A little further on, down a dirt road and after the directions of a young man on the side of the road whose accent I could hardly understand, we found a lighthouse for sale! It was at the tip of the southwest cape of the Island above red cliffs carved in amazing shapes by the waves. We didn't buy it, even though it was only $110,000 and included a beach and three acres of land.

It was finally time to leave this bizarre and wonderful Island, this time by bridge. The Confederation Bridge is 12.9 km long and is the longest bridge over ice-covered water. No ice today, though. Because we are in a big Ford truck, we can actually see over the concrete barrier on either side, and because the bridge curves like a snake you can actually see it as you drive over. But we stopped on the New Brunswick side anyway to do the tourist thing and take pictures.

Our destination for the day was Katie's house (K7) in Dieppe near Moncton. Katie says everyone in Dieppe is French, and I think it is true. In fact it has been tough for her to find a job because in spite of her last name she doesn't speak French. She had a marvelous dinner waiting for us, soup and haddock and salmon and rice and veggies, plus chocolate pastries from a local German bakery. Her mom, a wonderfully funny person and by her admission terrible driver, gave us an adventure to be remembered by taking us to beach to catch the last moments of a brilliant deep red sunset. It was wonderful to begin catching up with Katie, who gave up her room for us.