The four-hour prayer session at Taraunga HOP was very different than the morning before. Just two people gave leadership: a young woman led for the first half on the piano, singing her prayers and worship to God. It was quite beautiful, and many of her words were used of God to speak to my heart. I appreciated that her worship led us through some very specific and pertinent themes. The second half was led by a young man, who was very skillful on the guitar but his words were very general in nature, and I found his sampled guitar rhythms distracting after a short time. But we both still appreciated our time there, and wonder how to incorporate this idea into whatever ministry we next find ourselves.

We had an invitation from Quintin, who served at Qwanoes several years ago, to come and visit him at the camp where he has served for the past six years, Finlay Park Adventure Camp. We are so glad we did. On the way we passed through Matamata, and passed up the opportunity to visit the movie site of Hobbiton, for $66 per person. Quintin’s camp is nearby, and was quite enough for us. When we arrived he was still at work, getting ready for a weekend group, so we wandered around and got ourselves settled into the great little house he renovated on site.

When Quintin came home we caught up a bit, and then he made the suggestion that we go for a ski! He didn’t have to ask twice, and though I was a little nervous since I haven’t skied since I wrecked my shoulder, I was excited about the opportunity to get on the water. He has his own boat, a nice Mailbou built for skiers, though he has a wedge for the wakeboarders too. How did it go? Something like this… 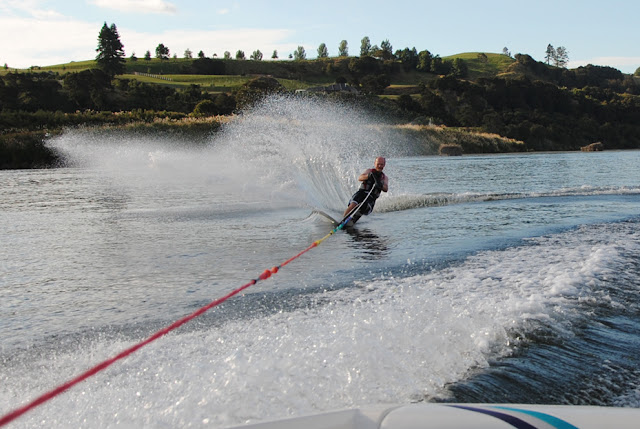 So fun, and though it was a bit harder for me to get up, I was fine after that. Then I drove for Quintin, and though the last time I drove a ski boat goes much further back, that was fine too. I squeezed out one more ski before my energy was gone. We went back to his house, where Sarah and I made dinner while Quintin met his guests, and then we had a good couple of hours to chat and hear one another’s stories.

That night, he was taking a group on a glowworm tour and invited us along. This was not a cave tour but a boat tour up a narrow gorge. The stars were brilliant, the air warm, and we passed up a wide creek, under a bridge and into the gorge. The canyon walls were high above us and the stream narrow, so that we bumped the edges occasionally. For about half a kilometer the walls were just covered with the tiny but bright pinpricks of light that are glowworms. It was so beautiful. What I liked best was that the tiny glowworms and the massive stars above them looked just the same. What a wonderful world God has made!

The next morning we made a late start while Quintin worked with his group, and then had lunch together and caught up some more. God is opening doors and giving dreams to this young man, and he is coming to Canada in June for an indefinite time. It was great to hear, and I hope we can reconnect back at home. Then we were on the road again and on our way to Waihi Beach.

If you have been following this blog you might remember the family who hosted us and helped us get organized after we bought the van in Auckland. Mike, Helen and their 10-year-old son David had invited us to join them in February at their “bach” (cabin) at Waihi Beach on our way back up. Waihi Beach is a great little community on a fantastic surf beach, and their bach is WW2 army housing and very comfortable, just a hundred meters from the surf. The first thing we did when we arrived was to join them on a trip to the beach to dig for tuatuas (small clams) and go boogie-boarding. So fun. We found a whole bag of clams, and I discovered that though my shoulder won’t let me surf yet (can’t reach high enough to paddle), boogie-boarding is still really cool. And better suited to the smaller waves we would have over the next few days. 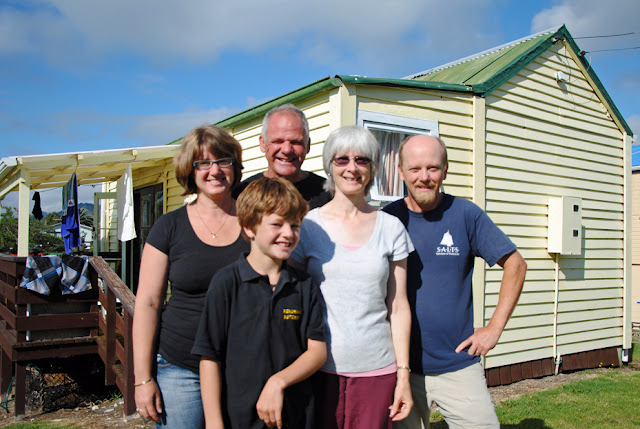 We stayed with them for four wonderful days! The weather was pretty mixed, but didn’t stop us from a pleasant flow of opportunities and just chilling at the bach: walks on the beach under amazing sunsets; a hike to another beach on slippery paths; a small church service with a great preacher; fantastic meals (Mike is a chef and Helen insists on good food and lots of it); more boogie-boarding with David and his cousin Luke; a trip to a huge open-pit gold mine and a series of historic tunnels; another trip to Cathedral Cove where the children enter Narnia in the Prince Caspian movie; a sidetrip to Hotwater Beach where you can dig your own hot tub right in the sand; Valentine’s dinner at a super roast beef buffet; games and long conversations about past memories and future dreams and church life and home life; more boogie-boarding; and many long walks on the beach. Mike and Helen and David blessed us over and over, and we so appreciate their friendship. It was very hard to leave. 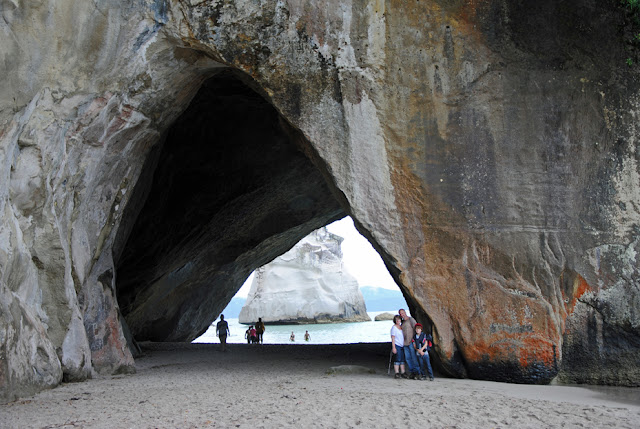 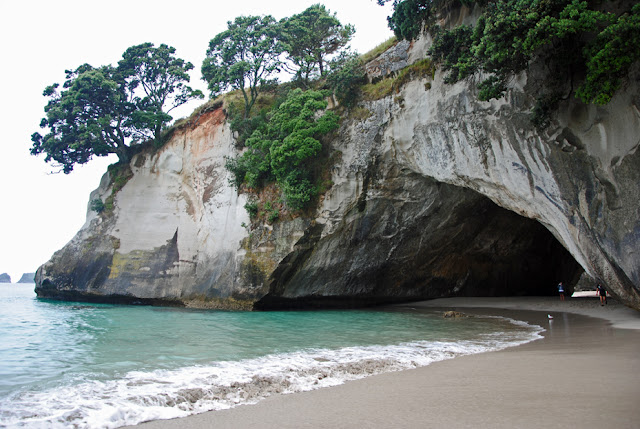 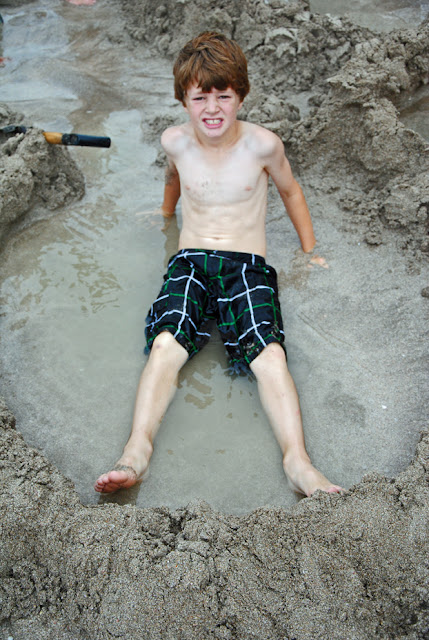 But it was time to head north. The end of this journey is drawing near. We decided to make the trek back up to Kerikeri in just one day, which anyone living in Auckland just wouldn’t understand. But hey, we are simply not city people. We crawled through the City on State Highway 1, enjoyed the view and kept on going. Actually, we made one stop: we spent a pleasant hour at a white sand beach just south of Whangarei, soaking in the sun and the views of brilliant blue water.

We arrived in Kerikeri like we promised, in time for dinner, and spent the evening telling stories with John and Michelle, Josh and Ellie, Daniel and Lana, of all our adventures over these seven weeks that we have been gone. It is good to be with them again – it felt like coming home. So now we are catching up on correspondence, writing (finished the first draft of my novel!), photos, visits with friends, laundry and getting the van ready to sell, all before we leave for Canada on Friday. But I am still restless for adventure and beaches, I think. The day after we got back, I did a 10 km trek into a favourite beach from the last time we were here, and the next day we took the girls to another favourite surf beach where we went boogie-boarding. I was going back in the water for one more ride when I saw the dark shapes of two large stingrays in the waves, so with Steve Irwin in mind I went a little way down the beach to catch my last wave. 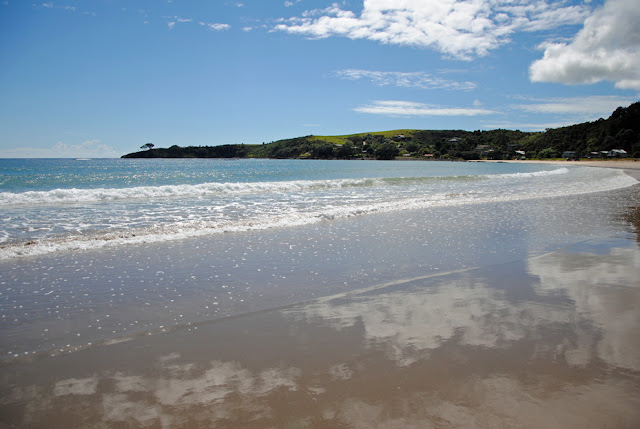 We decided on one last adventure, so on Sunday after pulling ourselves away from all the questions of friends at church, we left for Cape Reinga at the very top of New Zealand. We had a beautiful day to drive and decided to do most of our sightseeing on the way back, so we got up there by about 4:00 PM. I had forgotten how very beautiful it was up north. And so different from the other times we had visited in the winter. There was no wind, and it was warm and sunny, unlike the hurricane winds and chill we experienced before. This is where the blue Pacific Ocean meets the aqua-green Tasman Sea, and it was incredible to watch huge waves meet one another and burst straight up in the air. I wouldn’t want to take a boat through them! 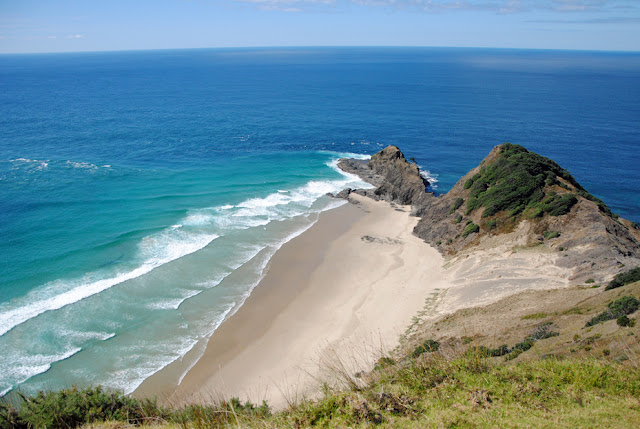 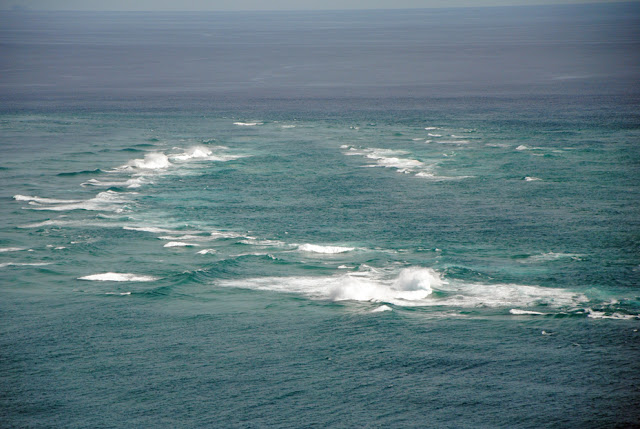 Sarah managed to walk all the way down to the lighthouse, though she paid for it the next day. It was nice to know that we are only 11,222 km from home, and that we will be making the journey soon. 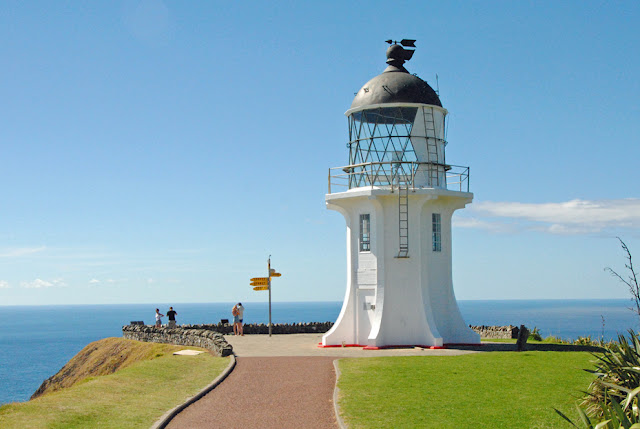 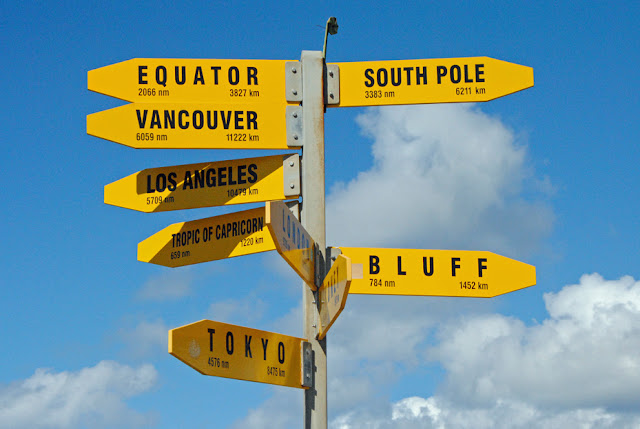 We drove down to a campsite nearby, which was nearly full but we found a nice spot near the beach. Great waves – I was sorely tempted to go in but didn’t. Should have. Instead I walked down the beach and up a hill and took photos, then came back and made a fabulous beef stew – from scratch – which we enjoyed very much as we watched the waves. That small white dot on the far right is us. 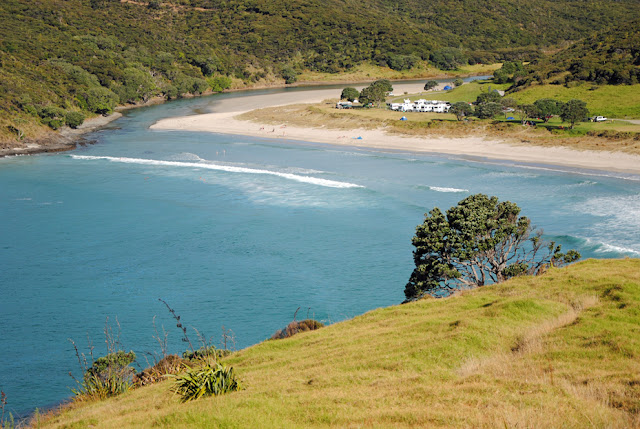 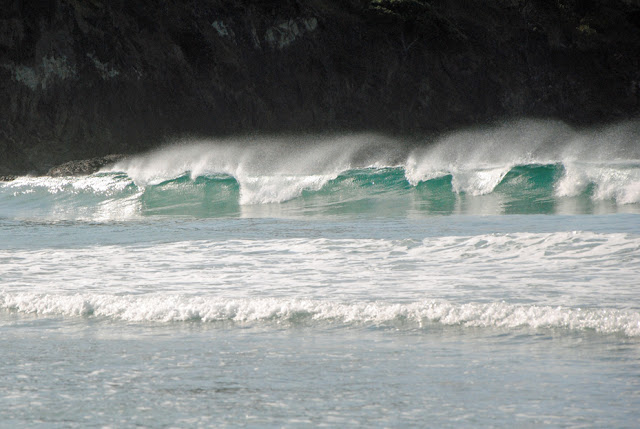 Unfortunately, we didn’t find out until we went to bed that while we were making dinner, about 200 mosquitos (no exaggeration) had entered the van and hidden under the bed. As we tried to go to sleep, out they came a few at a time. At first we just squished them thinking there were only a few, but about 1:00 AM and a hundred kills later, I abandoned ship, grabbed the spare blanket and slept outside, leaving Sarah to the battle. Sounds mean, but somebody had to drive the next day. It goes without saying that we both slept badly.

So the next day, though it was still mostly sunny, we didn’t feel up to much. We slept as long as we could, hung out at the beach for a while, then returned to Cape Reinga. 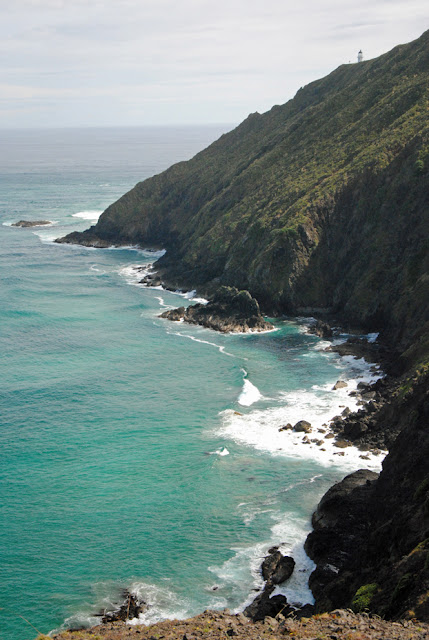 I walked down the craggy trail toward the long beach we had walked six years ago, and then we drove to the sand dunes, wondering of we dared to drive Ninety-Mile Beach in our little van (we didn’t), and instead found another beach of fine, pure white sand to have lunch. It was all we could do to visit a couple shops we enjoyed before, sustain ourselves with marvelous NZ ice cream, and head back home. 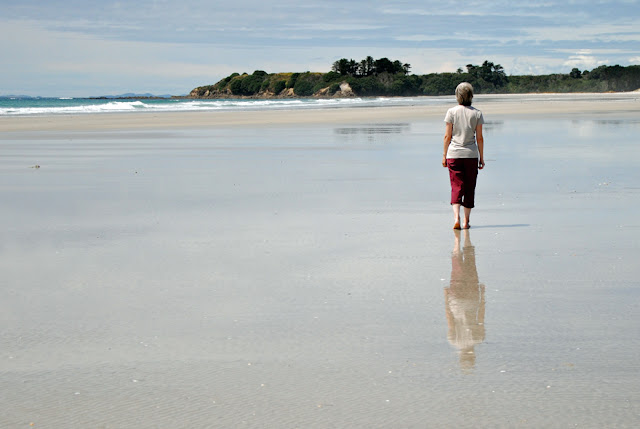 Home! Where is home? Well, we don’t really know yet. Kinda expected to by this point, and there are some opportunities possibly opening up. But God’s word to us is still to wait and expect great things from him before we attempt great things for him. I guess that is the next chapter. See you there.
Posted by Jim Badke at 5:28 pm