One of our favorite spots so far is the area around Pancake Rocks. Except for the pancakes, it is not so very different than the rest of the West Coast, but it has a campground we enjoy and a marvelous beach. With YWAM plans changed, we decided to return that way and spend a couple of nights there. As we passed by Pancake Rocks, we asked about the best time to see the blowhole in action, which was at high tide after 2:00 PM.

It was good to relax, good to walk the beach, and I spent a fair bit of time writing as there is power in the little kitchen area. I have written the ending to my novel and have just two sections to finish up, both of which require a little Internet research. But I am within about 1500 words of being done, plus all the adjusting and editing that will be necessary. My brother, who is also a writer (he has six books published, I believe), has told me that getting it published by a publishing company is pretty tough these days, and I would likely need an agent. We’ll see. If not, there are lots of other means these days, and I have some plans. If you want to read it, check back here sometime in the next few months and I will let you know how.

We spent a relaxing morning, not needing to go anywhere. Because the wind was strong from the southwest and the waves huge, the conditions were perfect for the blowhole, and we went there early. Enough wind to take your skin off, but we found a great spot out of the spray that was drenching most other people, and our raingear took care of the wind. At first there was only the occasional gusher, but around 2:00 the blowhole let loose a number of times, which was spectacular. We also enjoyed the “Chimney Pot” nearby, and a “Sudden Sound” that was like the earth breathing. 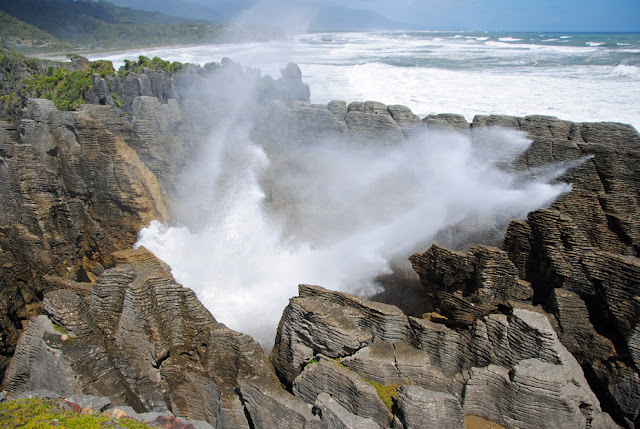 We took a drive after dinner and sat in the van with a good view of the setting sun and the beach. Maybe you are getting tired of my sunset shots, but this one is pretty good.

Imagine, God is painting scenes like this, not once a day but 24 hours a day, seven days a week, somewhere in the world. Obviously he likes sunsets too.

We were a little uncertain where to go the next day. We have a few more days than we really need for getting to the ferry on time. So we set off for Westport for gas and groceries, stopping at Cape Foulwind on the way. Maybe we have seen too much, because in spite of its wild name we found it quite tame, though the baby seals were cute. Unfortunately too far away for my zoom lens. 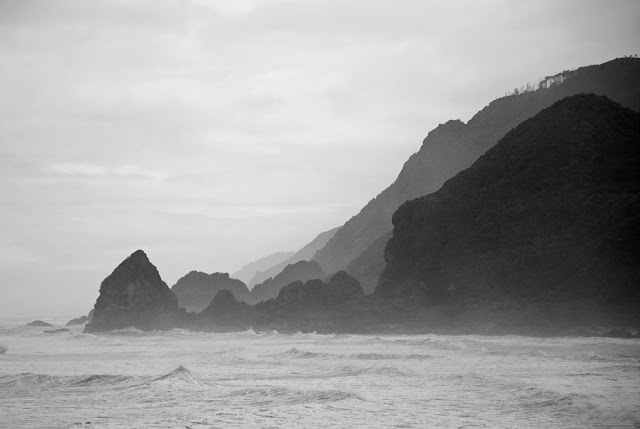 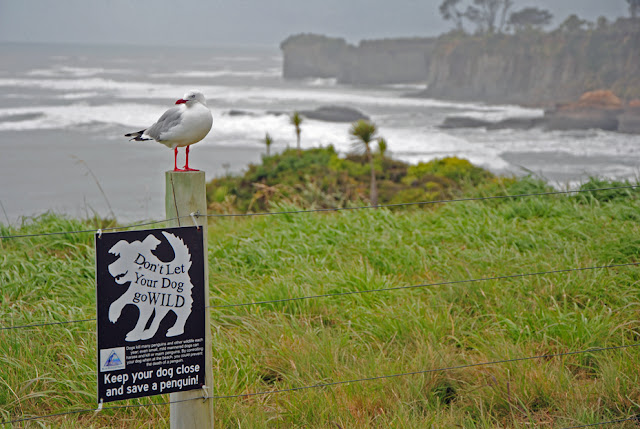 Then we headed east through the Buller Gorge (think Lord of the Rings) and camped in a big grassy field with misty mountains all around. There is a wall that they built here right over the fault line, to see if it would move. It hasn’t, in 47 years, so they are expecting a Big One like we are on the West Coast of Canada. Still, I was taking a nap in the van and was awakened by a gentle swaying that lasted about a minute. Probably not the fault line we were sitting on, but poor Christchurch again, a hundred km away.

It was Sunday morning, and we set off to see if we could find a church in Hanmer Springs, another tourist destination nearby. We came in a little late to a Presbyterian service (the equivalent of a typical Baptist service in Canada, which was friendly and nice but I think we have enjoyed the slightly-more-alive services at the Baptist and New Life churches here. We also have found that we are not much interested in tourist destinations. A pretty area, but the main attraction is the hot springs, at $18 a person. We stopped at one the day before just to look, and if I had gone for any of them it would be that one – a Japanese one with rock pools and gardens, for $19. In any case, Sarah was not up to going in, and I didn’t feel like going by myself at that price.

So we carried on that afternoon, through mountains and hills and twisty roads and over blue rivers, arriving at Kaikoura on the east coast. We felt it was time for showers and the chance to make dinner out of the misty rain, so we found a private campsite, a little more than we wanted to pay but clean and on a nice beach. After dinner and dishes, we pulled out the computer and watched a movie for the first time in ages, Letters to Juliet, and then went to bed with the roar of surf on one side of us and the occasional roar of the highway on the other.

We really didn’t have far to go the next day, so we took our time, and I watched surfers as I ate breakfast, wishing I was one of them. The stretch of highway to the south of us looked interesting, so we took it, even though it was the opposite way to where we needed to go. So worth it – rocky headlands with very narrow tunnels to go through, rocks with seals on them everywhere. It was a good warm-up to the highway we eventually took north, which was more of the same. We stopped for lunch and I went to take a photo of a seal on a rock, and found as I walked through the grass that there were seals everywhere, who sleepily made sounds at me as I passed. 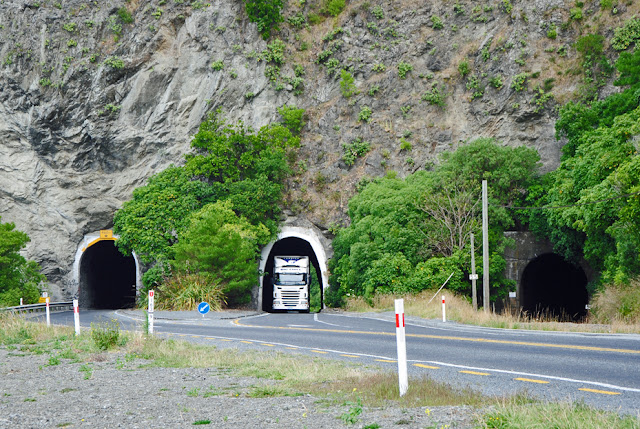 Our destination was another DOC site on a beach near Cape Campbell. All the Kiwi’s were as usual all stacked together in one section near the washrooms, so we camped down a ways where we had the view to ourselves. I went for a hike, finding a good view of the big lighthouse at the Cape, and when I came back there was another van parked a little way from us. The few sentences we heard and the fact that they too wanted a more secluded spot made us think that they might be Canadians, so after dinner and walk we introduced ourselves. Canadians. From the West Coast. Vancouver Island. Cobble Hill.

They are here for almost the same time frame as us, but they explored the North Island first. We had a good talk, sharing favorite spots we had seen and best campground locations. We found out that our kids are about the same age and probably went to school together. And we exchanged addresses and phone numbers for when we get back. Very cool. As we talked, the color came into the sky and we could see bits of the North Island in the distance. 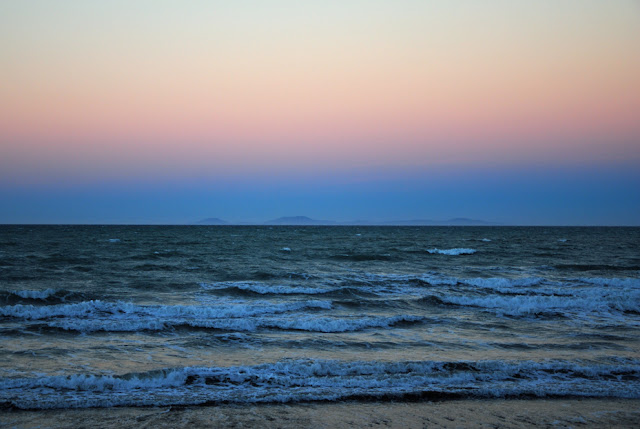 We had a lazy morning, then debated back and forth whether we should stay there another night or move on a little closer to Picton. In the end we decided to go, but it may have better to stay. First, we stopped at the McDonald’s in Blenheim to check email and stuff (the ONLY reason we ever go to McDonald’s!), and I managed to do something that only happens to other people: overwrite a file with an older version and delete three days worth of writing and editing on my novel. It was hard to take, but I have a sense that it was used as discipline from God and that it will be okay. But I know there are bits of the book that will simply never be the same.

We arrived at our next campsite, and found that it didn’t really compare with the last one. I think we are getting very picky about our campsites, because this really was nice – beautiful calm beach and cool places to explore – but we couldn’t park with a beach view. Anyway, we ended up liking it after a while, and in the morning Sarah even managed a longer walk out on some rocks to a rock arch, which she really enjoyed. Sheesh, we are spoiled!

Then we drove to Picton, found a campground with showers (yeah!) and a used book store with decent books and not-crazy prices. Got a one-volume version of Lord of the Rings that should last me until Canada. Our last day on the South Island – hard to believe!
Posted by Jim Badke at 2:17 pm

Awesome pictures Jim, won't ever get sick of Sunsets, or sunrises for that matter - keep 'em coming!