Orangeville, ON to Drumheller, AB

First of all, I want to say to the many students we missed connecting with, from Ontario to Alberta, we are very sorry and sad that we missed you! For some, our schedules didn't merge, others we didn't know where you were, and for others, the geography was hard to manage. But we are still sorry, and hope our paths cross again soon.

Secondly, for those who have been following this blog and wonder if we dropped off the edge of the earth, we haven't, though Drumheller where I am writing this is right next door to the edge. It's just that ever since Ontario, we have been either driving or talking with students or sleeping. Nothing else. It has been marvelous, and I will tell you briefly about it.

After a needed day's break in Orangeville, we moved on to Kitchner/Waterloo. People say it that way because there is no space or barbed wire to tell you when you have passed from one town to the other. There are three Kaleo students there who didn't know one another, so we arranged to have breakfast with them at Cora's, a place that only does breakfast. It was so fun chatting with them all: Catherine (K5), Deborah (K6) and Emma (K7), and I hope they will stay in touch. 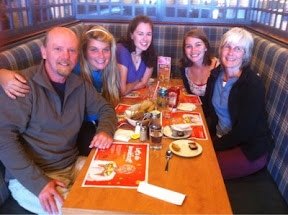 We then went to St. Jacobs, a little town Catherine had introduced us to the day before, which has the most amazing Farmer's Market. We went a little nuts buying cheap and very fresh fruit and veggies, forgetting that we would be crossing the border the next day and would have to leave them behind!

So Ally (K3) benefitted as we met her at Starbucks in London - so good to see her and hear her side of her wedding story after hearing her husband Tim's. Also happy to reap our harvest were the girls at Erin's house (K5), who topped their yogurt with the blueberries and blackberries we missed picking at home this year. What a wonderful crew Erin has gathered around her as she studies there! So good to hear her story and her heart.

It was a tough decision: should we go north or south around the Great Lakes? Either direction there were students to visit, and either way there were students we would miss. Sorry, Daniel and Nick and Jenny - we would have loved to see you as well, but we chose the southern route. Another day, we hope!

We were kinda nervous about this route, all Interstate highways and skirting the edge of Chicago. It was not as bad as we thought, though not especially scenic. We ran into more tolls, and were ready for the bridge at Sarnia (where on earth are you, Mike?), but not the tollway past Chicago. The matronly woman at the booth said, "Sixty cents, nope, American only," which we didn't have, so she wrote up a pink slip for us instead. Really. No credit cards?? It was a very long day, the farthest we had traveled in a day, and we were so glad to find Eric (K6) and Ellie (K7) at the end of it.

Ellie is working at the Discovery Centre at the local museum, and she took us for a tour of cool stuff to do, like make tornados and do tricks with mirrors and (the best) a thing that makes a bubble all around you. So fun. We chatted lazily at a local lake that had more boats per square 100 yards than I have ever seen. Eric has the unique opportunity to serve at a church plant, and on Sunday we got to see him in action leading worship, and that evening teaching his very precocious youth group. 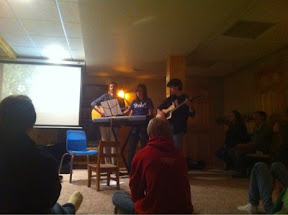 Both their sets of parents spoiled us rotten, and it was cool to have dinner with everyone at Ellie's house, plus Shawn and Danielle who used to serve at Qwanoes. It was hard to leave.

Minniapolis is home to a family that sent to Kaleo both John (K2) and Ben (K7), renowned for their love of Ultimate Frisbee and Jesus, not in that order. A very fun household! Dad Steve is very excited about a TV show about motorbikes and stuff he is working on. We greatly appreciated the electric heater he gave us, which is currently warming my toes (pun, if you didn't notice), since the nights are getting chilly.

A bit stormy the next day, and the waves were getting bigger on Lake Superior as we finally found it on the other side of the grotesquely fantastic overpass maze of Duluth. We decided it was best to strike directly north to International Falls and Fort Frances, where Sarah has relatives. And, where we had more toll trouble! No signs told us about the $7 toll to cross the bridge into Canada until we had pulled up to the rickety shack where a young lady told us we could turn around in the narrow lane ahead and find cash. That prompted some interesting response, first from a friendly customs officer who wondered what the heck we were doing, and then from an even friendlier citizen, who stopped to offer to go and pay our toll with his pass. We spent an interesting evening with several cousins of Sarah who came over to check out the spectacle of Western relatives, and whose conversation - for lack of sleep or perhaps translation - I could not follow.

The road from the border to Kenora, winding between the many, many waterways of the Lake of the Woods, is very beautiful. Sarah told me a story of her mom working at a cookhouse for a logging camp here decades ago, and how she would paddle herself out on the weekends and then hitch a ride home. To our delight, we finally saw some red on many of the trees, though we will miss seeing the full splendor of the autumn colors.

A. (K3) and her husband R. have had doors opened to them to teach in a closed country I can't name here. They amazed us with their stories and photos and videos, which you may not see until heaven, if you can see videos there. It was a rare privilege. They return soon, and will love your prayers, which God will understand even if you don't know who and where they are.

Okay, don't hate me, Prairie-ites, but I felt my heart drop as we left the trees and rolling hills to enter the lands where (as Marv Penner puts it) God sat while he was making the rest of Canada. The first five minutes were lovely.

Holly (K2) wanted to meet us at The Forks in Winnipeg, which is a market kind of place by the river. She brought with her the first Kaleo baby we have seen on this trip (besides Brie's photos), and little Carley was very cute, though a little too fascinated with goose poo. So fun to see Holly, a student just a few years ago, enjoy being a mom. Haley (K7) joined us later, and led us on an exciting follow-the-leader-through-rush-hour-traffic ride to the home of James and Julia (K1), where we would have dinner and stay the night. Steve (K5) also came up from Winkler to share the pizza and conversation. I marveled at the competency and achievements of these students, and conversation continued late into the evening. Not so good, since some had a long way to go, and we hoped to reach Caronport in one shot the next day. But oh so good to see these people we love that we haven't seen in so long. Never enough time!

The trek to Briercrest College and Seminary didn't really seem that long. Jules Verne's 20,000 Leagues Under the Sea on the iPhone helped. Good thing, because our time there was a marathon! Here was our schedule, quickly established: 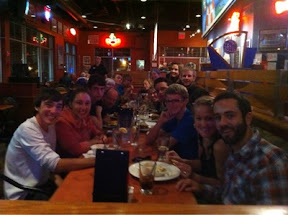 Whew! So encouraging, almost overwhelming, and we were grateful that the school put us up in the hotel and gave us a meal pass. More and more, this trip is becoming all about ministry - both given and received by us.

I am almost caught up. Monday afternoon we made the short trip to Saskatoon, and I have to admit it was quite beautiful with the deep blue lakes and ponds contrasting with the burning gold of freshly harvested fields. Why I didn't stop for photos I don't know, but the colors are firmly etched on my brain. Sarah (K2) met us at the end of the road and caught us up on several years of her life that we had only heard long-distance before. But she also practically refitted our aging computer: memory upgrade, hard drive clean-up, and a good scrub. If you want someone who is good at everything she attempts, call up Sarah.

The road to Edmonton gave us our first truck trouble. We were getting low on fuel as we approached Lloydminster, so I pulled into a little town that had two pumps, one for gas and one for diesel. Bad idea. The garage guys in Lloyd told me that some of those small towns get so little business that the fuel sits for ages. It made the truck quite unhappy, but a fuel additive seemed to solve the problem.

Our niece Charis (K3) and her husband Josh are both attending the U of Alberta, she for English and he for a masters in philosophy. Their bookshelves contain the kind of books you wish you dared to read. They are very fun people and we enjoyed our trip to Red Robin's with them. It is good to have so much stimulating conversation with people who understand how high the stakes are in this world, who know that what we think and do matters. The next day we connected with Selena (K5), a glider pilot and also a student at the U of A, who showed us the most beautiful photo of our old, beloved house in Crofton that we have ever seen, and gave us a frame to put it in when we get it printed. We then spent a good part of the afternoon in a coffee shop with Jordan C (K1) and his wife. He is the junior high youth pastor at a large church, an amazing opportunity for a guy with loads of experience but just two years of Bible college. They are mentoring and training him, seeing the vast potential. They filled us in on the wonderful story of how they came together, and Danielle is no doubt a match for this energetic guy. We finished off the evening with Brandon (K3) and Little Kim and Ashlee dropping over, my mind swimming with conversation but so glad to see them.

We decided it was time for a breather. So, after seeing Josh and Charis off to school, which was a little weird since it is their house, and Andrew (K3) coming over to fill us in on his ministry also as a youth pastor in the city, and connecting with Krista (staff), and her two marvels of babyhood, after far too many years, and a quick visit with Kelsey (K6) who we saw in Victoria just before we left on this adventure, we headed for Drumheller, the site of the world-class Royal Tyrrell Dinosaur Museum, which we will visit tomorrow, panting to catch up with these past number of days... And now to sleep.